Tobia Wiedemer. Covenant of Love for the Youth of the World come true: From the 7th to the 10th of August 2009, Schoenstatt was a home for a group of approximately 180 American High School and Adult participants from 14 Military communities based in 6 European countries. It was a success in every way and everybody was richly blessed. 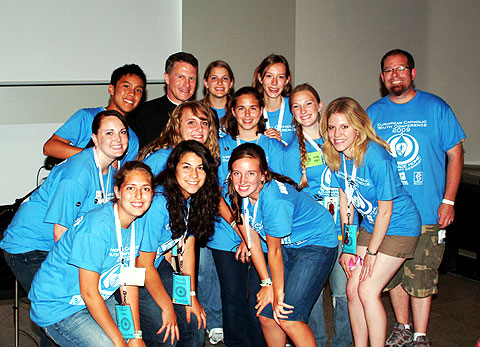 It opened on Friday, August 8th, after dinner with a welcome in the aula of the Adoration Church and continued with the ADORE Ministries worship team from Arizona, USA. This very lively team of musicians animated the evening with song contests and silly dances, yet also deeply moved us all with inspirational talks. Everybody loved the music of the Josh Blakesley Band and the wonderful talks by keynote speaker Ennie Hickman, emphasizing his deep love for his four children and God’s unconditional love for us. The evening ended with Adoration of the Blessed Sacrament and Benediction presided by Fr.Neil McGarrity, a visiting priest from Scotland.

Guys only – Girls only 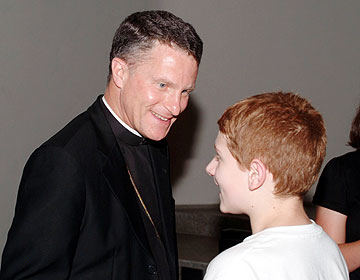 Saturday morning offered several options for selection in the Breakout Sessions. “Guys only” and “Girls only” presentations on the Theology of the Body by Pope John Paul II was one of the options that was received with great enthusiasm and attendance.

On Saturday afternoon, Archbishop Timothy P. Broglio, Archdiocese of Military Services, joined the joyful group. He captivated all with his vocation story and answered all sorts of questions asked by the young people; for instance: “What is your favorite animal? (A dog) Can you get drunk on Mass wine? (Yes, which is true if you drink too much of any wine.).

Rosary procession to the Original Shrine 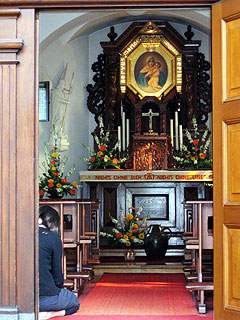 The evening highlight was a walking rosary procession from the Adoration Church down Mount Schoenstatt to the Original Shrine, the founding place and heart of the Movement. The prayer there concluded with the Bishop’s blessing and an exchange of unity crosses followed by adoration and confession in the Pilgrim Church. The Archbishop later mentioned that this was one of his favorite parts of the Conference. After the long walk and busy day, everybody was glad to know that busses were ordered to bring people back up to Marienland!

Sunday morning was once again filled with music and meditation from the ADORE team in preparation for Holy Mass. Ennie Hickman, encouraged the teens to respond in Mass with the conviction they truly feel. As the young people celebrated Holy Mass with the Archbishop, a lot of the adults and Schoenstatt Sisters were pleasantly surprised about the enthusiastic responses and total participation of the youth. After lunch, the Archbishop – who loves working with teenagers – sadly had to leave, but for everybody else the program continued with more Breakout Sessions. The day closed once again under the inspiration of ADORE and Adoration. 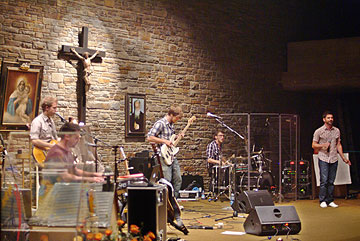 The Conference ended Monday morning with the last ADORE session and a closing Mass. Some of the teens shared how the Conference had touched their hearts and what they plan to do to bring change into their lives. After Mass, it was hard to say goodbye because so many new friends had been made. All felt truly changed by meeting Christ at this “beautiful place” during the 2009 Conference. It was a complete success in every way, shape and form! Everybody looks forward to another European Catholic Youth Conference soon.