Awaken Cerro Alegre, be a Land of Mary

CHILE, José Luis Nicolás. There are always memorable times, but there is not a better memory than that lived with joy. On July 12th thru the 18th, a group of sixteen youths along with Father Patricio Rodríguez and a seminarian, Juan Ignacio Homazábal, experienced something that at first seemed mundane, but as the days passed it was transformed into a great challenge. This was the first mission for the Schoenstatt Boys’ Youth in Valparaíso; it was a new experience for the University Branch of the Schoenstatt Shrine from Agua Santa, at Viña del Mar. They were caught in the difficulty of going on a mission in the city; it was an opportunity to motivate people who were asleep in their faith. 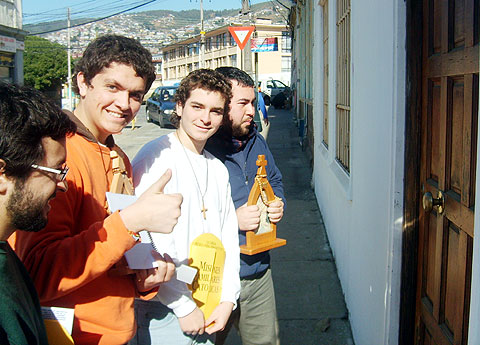 The specific place chosen was Cerro Alegre, an emblematic place of Valparaíso port, where the Parish of Saint Louis Gonzaga is located being one of the main areas, where Schoenstatt was founded in Chile and in the 5th Region. It is a must for tourist’s postcards, foreigner’s photos, and it is even the stage for some television programs, but it is without a strong spiritual identity for its neighbors. That is the reason the challenge was so special: to revitalize the parish was the password.

The difficulties quickly arose for the first part of the mission; many doors were closed in the faces of these youth, and many others were not opened. However the persistence of our university students was stronger. It took them one week to overcome the initial distrust and misinformation of some to motivate the neighbors into participating in the activities at the parish.

This was not the only thing that unfolded; rather it was their joys, dreams, and desires they transmitted through their hearts and souls that were willing to share in the faith and in the beginnings of a great task. 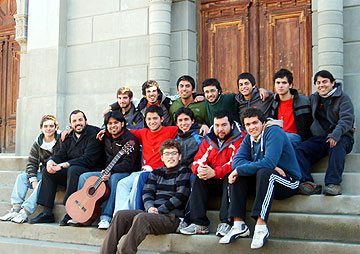 It is said that the best stories are those that end at continuing points and not at the end; those that leave challenges and set forth lessons, those that invite us through holy motivation to continue on the road. This is one of those stories. It is a story about young people who left their homes to learn how to get up after falling down and not to be discouraged, because discouragement is defeat, and victory is the optimism to believe that nothing is impossible, since the future is made of dreams and vigorous work.

This is the story about some youth who demonstrated that the community of the Parish of Saint Louis Gonzalo was not dead; rather they were asleep. Therefore in order for them to continue to be awake, more than sixteen youth were needed, and indeed, the large Schoenstatt Family is always available for motivating it in faith, hope, and love. 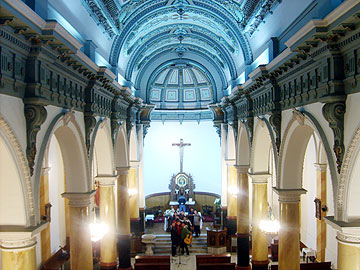